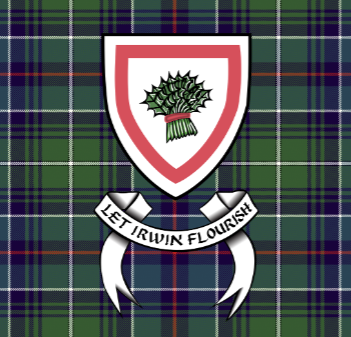 According to tradition recorded in a short family history entitled “The Original of the Family of the Irvines or Erinvines”, written in about 1680 by Dr. Christopher Irvin, M.D., later Historiographer Royal of Scotland to King James VII, the Irvings of Bonshaw are descended from 'Duncan of Eskdale', as he is known in the family. This Duncan was a younger brother of Crinan, the father of King Duncan I of Scotland. The paternal grandfather of Crinan and Duncan of Eskdale was another Duncan, hereditary Abthane of Dule and lay abbot of Dunkeld. It has been claimed that the latter Duncan was a direct descendant of Niall of the Nine Hostages, who was high King of Ireland early in the 5th century AD. This Duncan, as Abthane of Dule – an ancient title connected with St. Adamnan’s abbey of Dull – was of more consequence than any one of the seven Pictish ‘Mormaers’, being second only to the king himself in power and importance. He appears to have been appointed Governor of Strathclyde when that region was conquered by the Saxons and given to Malcolm I of Alban (the early name of Scotland) in 946 AD. His residence in Strathclyde is supposed to have been the old fort of Eryvine, or Orewyn, where the town of Irvine now stands. Both Duncan and his neighbour Dubdon, Mormaer of Athole, were killed at the battle of Duncrub c.965 AD, while leading their forces against a strong rebel army of their fellow countrymen.

Duncan was succeeded by his eldest son and heir, also Duncan, about whom little is known except that he also seems to have succeeded Dubdon as Mormaer of Athole, as he is called ‘Lord of Athole’. At the battle of Luncarty (of uncertain date), where the Danes were routed, Duncan commanded the left wing of the Scottish forces, under King Kenneth III. This Duncan is the progenitor of the oldest recorded families in Great Britain: the noble family of Dunbar is certainly descended from him, and traditionally so are the noble families of Irving and Home, all in the male line; not to mention the Royal Family and numerous other families by female descent. 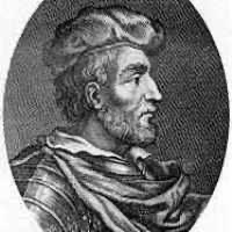 This second Duncan was succeeded by his eldest son, Crínán who, according to the first edition of John Major’s Historia Majoris Britanniae written in 1521, married Princess Beatrix (or Bethoc) daughter and heiress of King Malcolm II of Scotland, and by her was father of Duncan I, who reigned as King of Scotland for six years. Crínán was the progenitor in the male line of all the kings of Scotland down to Alexander III (died 1286), and in the female line of all the sovereigns of Scotland down to the present day, with the sole exception of Macbeth, who murdered his son, King Duncan, in 1040, and reigned for the next seventeen years. Tradition tells us that Crínán maintained a residence at Eryvine, but that he was the last of his family to do so, the fortress being used solely for military purposes thereafter. He was killed by Macbeth’s forces in 1045, while trying to avenge his son’s death and grandson’s deposition.

About 1020, Duncan of Eskdale’s eldest son is said to have married an heiress of the ancient British royal line of Coel Hen and taken up residence at her ancestral home, the ancient hill-fort of Dumbretton (the name means ‘Fort of the Britons’). Shortly afterwards he, or one of his descendants, built a new castle in Kirtledale, two miles further east and on or near the present site of Bonshaw; he took up residence there and gave it the name Irwyn which had by then become firmly associated with the family – as Irewyn in Ayrshire, Owyrn in Eskdale, and Heryn (the seat of Crínán brother Grim, Thane of Strathearn) in Strathearn.

One tradition claims that the first castle of Bonshaw somewhere in Kirtledale was built about this time. Later the Bruce family were assumed to be the feudal overlords of Kirtledale. It is thought that the Irvings and Bruces became very close friends and allies, and Robert the Bruce was a guest at Bonshaw in 1298. When he fled from the court of Edward I of England, in 1306, his first night back in Scotland was spent in the security of its fastness. There is a cave in the Kirtle cliffs at Cove, in which the Irvings are reputed to have hidden Bruce from the English on at least one occasion around this time. Dr Christopher Irvin claimed that Bruce took William de Irwyn, a son of Irwyn of Bonshaw, as his armour-bearer and, later, secretary. William served Bruce faithfully and became the first Irvine of Drum (See HERE).

There was then a gap of two centuries before contemporary records first refer to Bonshaw. There were then Irvings also living in other homesteads in the Scottish Borders, for example in Dumfries, Eskdale, Gretna, Hoddom, Luce, Pennersax, Skaill, Stakeheugh and Turnshaw. These Irvings were no doubt all relatives of the branch of the surname that settled at Bonshaw, though alas their genealogies have not survived. Many of the men of all these branches would have been “border reivers”, men who were engaged in feuds with other surnames in both Scotland and England, for the monarchs of both countries struggled to keep law and order in “the Borders”, and cross-border raids to plunder and steal cattle were commonplace until the early 17th century.